bxl-law is a combined law firm and EU public affairs consultancy practice. It has extensive experience in a wide range of sectors, while it has a particular focus on the EU’s regulatory environment for food and drink. bxl-law combines years of experience in legal advice, consultancy and European public affairs. Its Brussels hub is centrally based within walking distance of the European institutions.

Founded in 2010 and established in Avenue de la Renaissance 1, bxl-law since moved to a larger premises under the same address to prepare for growth and accommodate a larger clientele.

An opaque layer of EU regulatory action but one critical to businesses.

Many people are familiar with EU Regulations and Directives and the process through which they are developed through negotiations between the European Commission, Parliament and Council. More detailed rules which are used to implement Regulations and Directives are produced through a process called comitology. Rules developed through comitology are legally binding and can have serious implications for economic actors. Following the entry into force of the Lisbon Treaty (Treaty on the Functioning of the European Union (TFEU)), the two types of rules that can be adopted through comitology are:

– Implementing Acts: Article 291 of the TFEU

Delegated acts and implementing acts deal with the detail of a law’s application – in other words, the nitty-gritty. These acts are adopted by the European Commission, not the co-legislators (the European Parliament and Council). Their preparation, negotiation and adoption follow an entirely different pattern to the ordinary legislative procedure. The danger for stakeholders of comitology is that while the provisions in a Regulation may be perfectly acceptable to a business, if it does not engage in the correct ways with the comitology process the detailed implementing rules which are subsequently adopted may pose serious difficulties. The comitology process is also very opaque, and if stakeholders do not access the right advice, rules can be adopted and come into force before it finds any opportunity to raise its concerns.

The European Commission’s power is significantly greater when rules are adopted through comitology. Under the standard co-decision process, the European Parliament and Council adopt their own versions of EC proposals and an agreed text is then negotiated. With comitology, the Parliament and Council have less opportunity and time to raise objections and by extension, stakeholders have less time to address these institutions to raise objections. For stakeholders, comitology is the point where the EU machinery turns opaque to follow. While the Commission must be empowered by law to regulate by delegated act and implementing act, it is difficult to spot when these powers are being used, when acts are prepared, when to consult drafts and at what stage to make proposals or raise objections.

bxl-law can help you to identify – at the early and crucial stage of the preparation of delegated acts and implementing acts – the key people in the Commission who would hear your message, and bxl-law can help you put across your views as strongly as possible. We understand the procedures involved and can guide you through the rulemaking process, which can be difficult to understand, and guide you on making your interventions in the process at the right time and in the right place.

The two new Regulations on medicinal devices for the better protection of public health and patient safety (Regulation (EU) 2017/745 on medical devices) and Regulation (EU) 2017/746 on in vitro diagnostic medical devices are an example of a variety of goods and consumer goods heavily regulated by EU law. The updated regulatory framework for medicinal devices establishes new requirements for innovative products. It establishes a new framework for the classification of products which makes the re-assessment of medicinal products necessary. bxl-law can help you in dealing with the implementation of these new Regulations.

European law is subject to continuous change and re-interpretation. bxl-law assist companies and associations by advocating and lobbying in their own name or on their behalf, on issues of importance to them, directly to decision-makers and other influential parties. The assistance we provide clients is based on years of experience campaigning on a broad variety of topics.

Sound monitoring and analysis, and accurate political and regulatory intelligence are the basis of any successful advocacy campaign. This includes not only following media reports, but also intelligence gathering from officials, policy-makers and other relevant players. Whether the issue at stake is large or small, bxl-law can help to provide you with quality intelligence gathering services. It will also act as your early warning system to identify any potential threats which may have an adverse impact on business operations.

Companies and associations may find themselves in situations where policies are formulated that have a potentially strong impact on their operations. This could be a new law, a technical standard for their product, a trade barrier, or an advertising restriction. bxl-law can help you to deal with the matter and develop an appropriate response.

Trade associations and alliances are an effective way of representing trade interests. A collective voice will not only carry greater weight and have a stronger impact over the lobbying of individual players, but is also more appealing to policy-makers. bxl-law can help in the setting-up and management of associations and coalitions in Brussels (namely ASBL and AISBL), and is also able to provide the services required to operate a successful association – from administration to advocacy.

Identifying and engaging with the right groups of people and individual personalities is crucial in public affairs. However, with the multitude of associations, interest groups and political staff operating at EU level, identifying the stakeholders who are influential on a particular issue is no simple task. bxl-law uses its network of contacts and experience to help clients navigate this complex landscape and map out and profile relevant stakeholders.

In the area of food policy, bxl-law can help you keep track of the news from Brussels, Strasbourg (European Parliament) and Luxembourg (the EU courts). We provide weekly or monthly updates tailored to the needs of your company or association which help you stay up to date on EU affairs while you focus on your core activities.

Law degree from the University of Frankfurt am Main (Germany); Master of Laws in European law from the University of Nottingham (United Kingdom). Qualified for the German bar in 1999. Research and teaching at the Université Catholique de Louvain (Belgium), Universidade Federal do Rio Grande do Sul in Porto Alegre (Brazil) and College of Europe in Bruges (Belgium). Legal Adviser to the Directorate General Health and Consumer Protection – DG SANCO (now: Health and Food Safety – DG SANTE) of the European Commission 2001-2004. Legal counsel to a European retail trade association 2004-2010. Author of numerous publications on European law. Attorney since 2010. Active in food and agriculture/ consumer and retailing/ travel, transport and tourism (see list of publications).
Jens Karsten is a member of the European Law Institute (ELI) and the Food Lawyers’ Network (www.food-lawyers.net).

The answer to this parliamentary question provides neat summary of research in the area like JPI FACCE,  AKIS (Agricultural Knowledge and Innovation System) and SCAR (Standing Committee on Agricultural Research):  Written...

European food law is constantly shifting. Publications on policy papers, amendments to laws, court judgments and statements by parliamentarians are many and in their entirety, difficult and time-consuming to track. Brussels Food Law Information Service is a weekly news service delivering updates from the European institutions related to food. Click for more information (opens in new tab).

How to find bxl-law? bxl-law is located within 200m walking distance from Rond-Point Schuman, at the corner of Avenue de Cortenbergh and Parc Cinquantenaire. 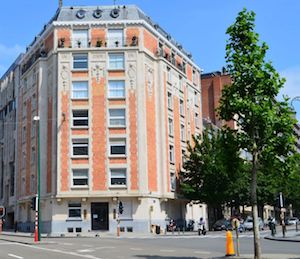